The festival will take place August 3-7, 2022 in a hybrid format, with select in-person screenings, live programs, and panels at Penn Live Arts at Annenberg Center for the Performing Arts in Philadelphia, and online events accessible to a global audience. It will include narrative features and shorts, documentary features and shorts, and experimental films. Festival attendees will also have access to a range of programs, conversations, and parties across the city.

The 2022 BlackStar Film Festival is set to feature a total of 76 films representing 27 countries, including 16 world, 8 North America, 12 East Coast, and 8 US premieres. 25 films will be Philadelphia premieres.

“Following the success of last year’s 10th anniversary celebration, we are thrilled to present this year’s festival and hope it allows filmmakers of the global majority to forge new connections with their audiences,” says BlackStar Founder, Artistic Director, and CEO Maori Karmael Holmes. “We curate every aspect of our events to be intentional community building efforts, centered on joy, radical care, and thriving, and we are excited to witness how this year’s festival embodies that spirit.”

“We are excited to continue connecting with and welcoming our community in-person and virtually. This festival is a storytelling celebration with programming that has lots of people in mind—from yoga for families to parties to issue-based documentaries and horror films,” added Festival Director Nehad Khader. 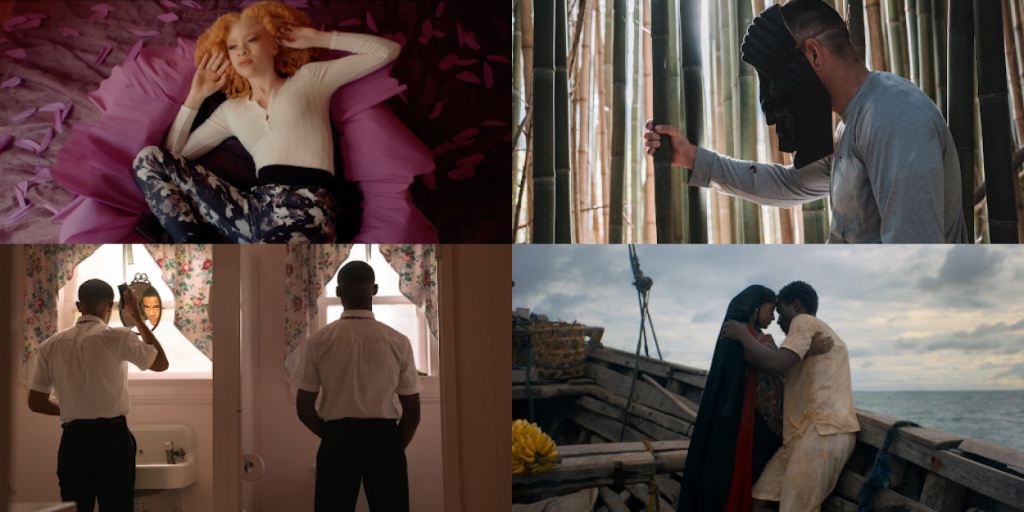 Stills from (clockwise from top left): Jasmine is a Star, ᎤᏕᏲᏅ (What They’ve Been Taught), The Spirit God Gave Us, and Tug of War.

Selections from this year’s lineup include:

Aftershock—a feature documentary directed by Paula Eiselt and Tonya Lewis Lee—follows two families as they galvanize activists, birth-workers, and physicians to reckon with the US maternal health crisis after having lost loved ones due to childbirth complications.

Blackalachia—an experimental film by Moses Sumney featuring a live conceptual performance with a 7-piece band atop the Blue Ridge Mountains—captures the intersection between nature, music, dance, and cinematography.

Conspiracy—an experimental film co-directed by Simone Leigh and Madeleine Hunt-Ehrlich—was shot in Leigh’s studio on the occasion of her historic exhibition in the United States Pavilion at the 2022 Venice Biennale.

Jasmine is a Star—a feature narrative directed by Jo Rochelle—follows the journey of a determined 16-year-old with albinism (lack of pigment in the hair, skin, and eyes) who makes it her mission to become a professional model in her hometown of Minneapolis, while attempting to go unnoticed in every other aspect of her teenage life.

Let the Little Light Shine—a feature documentary directed by Kevin Shaw—follows parents, students, and educators as they fight for the survival of a thriving, top-ranked Chicago African American elementary school that is threatened to be closed and replaced by a new high school that favors the community’s wealthier residents.

Mars One—a feature narrative directed by Gabriel Martins—chronicles a Brazilian family coping with an uncertain future as a far-right conservative leader rises to power. Through this time of turbulent change, the family’s optimism and deep capacity for love guides them.

Selahy “My Weapon”—a short narrative directed by Alaa Zabara—follows a young, deaf Arab girl, born in the ravages of a war zone, whose only weapons are her hearing aids and an old video camera.

Storming Caesar’s Palace—a feature documentary directed by Hazel Gurland-Pooler— uplifts the story of Las Vegas activist Ruby Duncan and a band of ordinary mothers who launched one of the most extraordinary, yet forgotten, feminist, anti-poverty movements in U.S. history.

Sub Eleven Seconds—a short documentary directed by Bafic—ruminates on time, loss, and hope; it offers a poetic imagining of the quest of Sha’Carri Richardson, a young track and field athlete, to achieve her dream of qualifying for the Olympic Games.

The Panola Project—a short documentary directed by Rachael DeCruz and Jeremy S. Levine—highlights the heroic efforts of Dorothy Oliver to keep her small town of Panola, Alabama safe from COVID-19, chronicling how an often-overlooked rural Black community came together in creative ways to survive.

The Spirit God Gave Us—a short narrative directed by Michael Donte—is a love story about the intersection of faith and queer love. Following two young Black men who volunteer as ushers for their Baptist church, it chronicles their journey towards love, connection and spirituality.

Tug of War—a feature narrative directed by Amil Shivji—is a coming-of-age political love story set in the final years of British colonial Zanzibar. Denge, a young freedom fighter, meets Yasmin, an Indian-Zanzibari woman, in the middle of the night as she is on her way to be married.

We Still Here / Nos Tenemos—a feature documentary directed by Eli Jacobs-Fantauzzi— showcases the aftermath of Hurricane Maria for the young residents of Comerio, Puerto Rico, who empower themselves to transform their lives and communities despite the disregard of the government and poor relief management.

ᎤᏕᏲᏅ (What They’ve Been Taught)—a short documentary directed by Brit Hensel and filmed on the Qualla Boundary and Cherokee Nation—explores expressions of reciprocity in the Cherokee world, brought to life through a story told by an elder and first language speaker.

This edition of BlackStar Film Festival also marks the world premiere of short films created through BlackStar’s Philadelphia Filmmaker Lab, presented by Black Experience on Xfinity, following the announcement of the Lab’s inaugural cohort last fall. An opportunity designed to uplift emerging and mid-career artists in the Greater Philadelphia area, the Lab has supported four filmmakers by making equipment, space, crew, mentorship, funding, and critical feedback available over the course of the past year. The Lab’s 2021–2022 fellows are Bettina Escauriza, Jasmine Lynea, Xenia Matthews, and Julian Turner.

Bettina Escauriza’s project, Tonight, We Eat Flowers, centers on a person who sells hold music to companies, employing magical realism and the absurd to disrupt expectations. Jasmine Lynea’s hybrid film, The Love Machine, is set in 2036 North Philadelphia in a dominantly Black neighborhood and focuses on cultivating a new perspective on love. Julian Turner’s short, The Big Three, engages a conversation surrounding Black representation and artistic ownership through a musical setting. Xenia Matthews’s film Ourika! utilizes surrealism, animation, and multimedia elements to further the ongoing conversation on the colonization of Black women’s bodies in art and material culture.

In addition to hybrid film screenings, there will be a slate of festival programming—both online and in-person in Philadelphia—this year. Select highlights include:

BlackStar Projects has seen considerable and continued growth over the past decade, both in the scope and reach of its festival and with new and continuing initiatives for the organization year-round. Last year’s 10th anniversary BlackStar Film Festival featured approximately 80 films, including 19 world premieres, and represented 27 countries. It was attended by more than 3,000 in Philadelphia and reached nearly 1 million viewers virtually around the world.

In addition to presenting an array of live programs, panels, and select in-person events and screenings, 2021 also marked BlackStar’s selection by the Academy of Motion Picture Arts and Sciences as a qualifying festival for both short documentary and short narrative films, making BlackStar’s Best Narrative Short and Best Documentary Short winners eligible for entrance at the Academy Awards.

Among BlackStar Projects’ continuing initiatives are Seen, a journal of film and visual culture that will publish its fourth issue this summer, the William and Louise Greaves Filmmaker Seminar, and Many Lumens with Maori Karmael Holmes—BlackStar’s signature podcast, which finds BlackStar founder Maori Karmael Holmes in dialogue with the most groundbreaking artists, changemakers, and cultural workers of today. The organization also celebrated the beginning of this decade of expansion with the opening of a new headquarters this spring.

Information on judging, sponsors, additional programming, and events will be announced soon. For more information on the festival and its programs, visit https://www.blackstarfest.org.

The lineup of films is as follows, with additional films to be announced in the coming weeks:

A Morsel of Love, directed by Helia Behrooz and Sana Norouzbaki

By Water, directed by Iyabo Kwayana

The Fire This Time, directed by Mariam Ghani

For Love, directed by Joy Gharoro-Akpojotor

Forgotten Paradise: Dream the Other Side of the River, directed by Charlotte Brathwaite

The Fourfold, directed by Alisi Telengut

Jasmine Is A Star, directed by Jo Rochelle

Lowndes County and the Road to Black Power, directed by Geeta Gandbhir and Sam Pollard

Mars One, directed by Gabriel Martins

My Saints Recognize Your Saints, directed by Rodrigo Antonio

The Passion of Remembrance, directed by Isaac Julien

The Ritual to Beauty, directed by Shenny De Los Angeles and Maria Marrone

Show Me Other Places, directed by Rajee Samarasinghe

The Spirit God Gave Us, directed by Michael Donte

Tomorrow Is Another Day, directed by Ng’endo Mukii

The Town, directed by Lindiwe Makgalemele

ᎤᏕᏲᏅ (What They’ve Been Taught), directed by Brit Hensel

Woman of the Earth, directed by Evelyn Mercedes Muñoz Marroquín

You Can Always Come Home, directed by Juan Luis Matos

BlackStar Projects is the producer of the BlackStar Film Festival, an annual celebration of the visual and storytelling traditions of the African diaspora and global communities of color — showcasing films by Black, Brown, and Indigenous people from around the world. In addition to the acclaimed festival, BlackStar presents an array of programming across film and visual culture year-round, including the twice-annual journal Seen, the podcast Many Lumens, the William and Louise Greaves Filmmaker Seminar, and the Philadelphia Filmmaker Lab, among other initiatives.